Cubo Modular Houses Made of Engineered Bamboo in the Philippines

Cubo has gained a lot of attention after its founder has been featured in mainstream media both local and abroad. The multi- awardee founder of Cubo Engr Earl Patrick Forlales, aims to solve the Philippines' housing problem by providing affordable modular houses. To achieve low construction costs, he uses bamboo, a widely available and renewable material in the Philippines, as his building material.

Cubo treats and processes bamboo into engineered bamboo that is standardized, making it a more workable material than raw bamboo. Cubo then manufactures standard panels, which can then be assembled on-site by the Cubo team. The prefabricated modular construction system Cubo implements allow them to assemble a house in a matter of days. 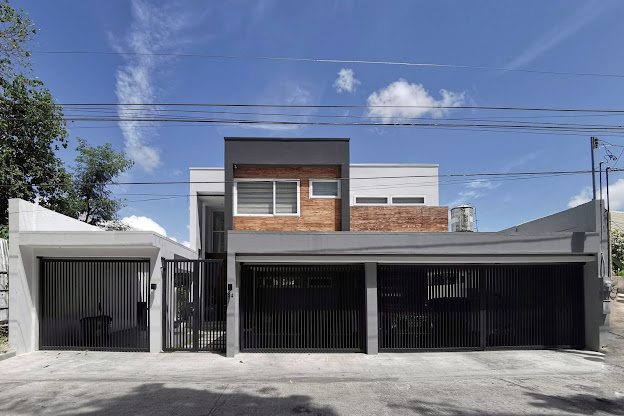 Project: House DL15
Year: 2015
Lot Area: 363 m²
Floor Area: 440 m²
A modern three-story house in Cebu City draws inspiration from Modern Scandinavian and Bauhaus designs. The house's layout was designed to maximize the steep downhill slope while minimizing excavation to the existing terrain.
The house has an open floor plan layout that connects the living, dining, and kitchen area into one open space. Upon entering the foyer, a double-height ceiling in the living room is the first thing you see. Large sliding windows and doors engulf the interior with natural light. The sliding doors in the dining area and kitchen connect the interior to the terrace, increasing the ground floor's usable floor area. All the bedrooms are on the second floor, and each bedroom has its bathroom.
The lower ground floor has a large lanai with a dining and living area. The ground floor covers the lanai, which provides a spacious outdoor space protected from the heat and weather. The lanai is open on three sides, allowing natural breeze to flow. The project was completed on 2018.

One of the key design solutions for a well-designed tiny apartment is multifunctional spaces. Assigning several functions to an area minimizes wasted space and maximizes every inch of space. Hiding unused components also declutters the area, making it appear larger than it looks. These are just some of the clever solutions designers implement to create beautiful and efficient interiors. Below are seven well-designed tiny apartments that will capture your interest.

Designed by: Architect Gary Chang
Area: 24 sqm / 258 sq. ft.
The concept for the apartment is a time-based design that uses shared space one function at a time.
Several movable walls hide everything out of sight, decluttering the space. Everything slides against the wall to open up center space. By layering several movable walls, the apartment has abundant storage space hidden within the wall.
Shifting the center wall panel to the center allows access to the hidden bathtub, which also has a folded murphy bed for guests. Gary Chang utilizes murphy beds to hide the beds against the wall.
A retractable projector screen on the window also doubles as a curtain. The mirrored ceiling makes the tracks less conspicuous and also creates the illusion of a bigger space.
Read more »
6 comments:
Email ThisBlogThis!Share to TwitterShare to FacebookShare to Pinterest
Labels: Design, interior, Tiny Interior

A tour on a modern 16 square meter tiny house
4³ is a tiny house design I conceptualize during the lockdown. With 4m on all sides, it has a building footprint of 16 square meters and a volume of 64 cubic meters. The design utilizes vertical space to maximize the livable area of the house. Each space is interconnected and has several functions. The living room transforms into a dining room, while the kitchen floor functions as a bench for the dining room.
Storage space is not an issue in this house. A full-size cabinet is found at the entrance of the house. Drawers underneath the sofa and kitchen floor provide extra storage space.
A net hammock increases the usable space on the loft while still allowing light and ventilation to the ground floor. This design aims to provide comfort to its users while utilizing every inch of the house's area.
No comments:
Email ThisBlogThis!Share to TwitterShare to FacebookShare to Pinterest
Labels: Animation, Architecture, portfolio
Newer Posts Older Posts Home
Subscribe to: Posts (Atom)