Located on the second floor of a commercial building in Mandaue City, the project has a floor area of approximately 130 square meters. The project was a redesign of an existing office. It had existing concrete walls and a movable partition.

We had to remove everything except for most of the concrete partitions. The wanted a bright and open interior. The space requirements were an open space for the office staff. A separate office for the manager and supervisor. A repair room and storage area. A soundproof conference room and an office pantry with ample seating space. 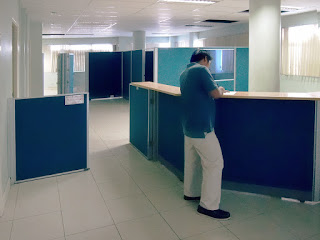 The limitations of the project are the two columns in the middle of the area and the plumbing. Since the office was located on the second floor, relocating the toilets and pantry was not an option. We could not access the piping below since the office space below was already occupied. We had to keep the location of the existing toilet.


We mounted the partitions close to the columns to reduce dead space. The use of glass partitions parallel to the windows maximizes the light penetration of the interior. Accent walls in the interior used the company colors of green and blue. We completed the project in 2013.